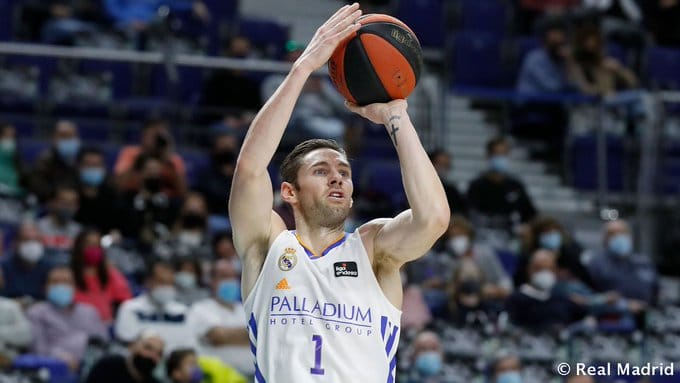 Real Madrid and Monaco won their first game of the best of five series in the semifinals of their respective leagues. Anadolu Efes struggles against Galatasaray as they will have to play a decisive game 5 to get a spot in the final.

In the ACB playoffs semifinals, Real Madrid won the first game of the series against the sixth seed, Baskonia (94-84). The game was really close at halftime, as Madrid was only up by 2. The gap has been created during the third quarter as Los Blancos outscored Baskonia 30-21.

Fabien Causeur’s teammates were on fire behind the three-point line, scoring 17 shots (equalizing the record in a playoff game), and 5/6 during the third quarter. Walter Tavares was a key factor, from both side off the floor, as he recorded 12 points and 13 rebounds. Fabien Causeur led all scorers with 16 points (4/9 3PTS), adding 6 rebounds, 2 assists and 2 steals. Five players were on double digit to help Real Madrid secure the first win.

In France, Monaco take the lead in the Betclic Elite semifinals against Pau-Lacq-Orthez (94-65). The Roca Team won all four quarters against Brandon Jefferson’s teammates. They were up by 16 at the half as they were never under threat of a potential comeback. Eight players scored nine points or more against Pau, six were on double digit. Their offense has been really strong and efficient, (68.2% 2PT, 45% 3PTS) as the team coached by Éric Bartecheky couldn’t find any answer to contain Monaco’s offense.

Despite being down in the beginning of the third, Galatasaray reversed the trend The difference has been made in different categories. Dee Bost’s teammates took care of the ball as they only turned it over six times, while Efes lost if 12 times. Anadolu Efes lost by five points (86-81), while Galatasaray hit 16 of their 17 free-throws, Anadolu Efes shot below 50% from the line (5/11). There is an other correlation, when Dee Bost scores 20 points or more, Galatasaray wins the game and vice versa. The next game will be decisive as the winner will join Fenerbahce in the final. Last game, on Saturday.