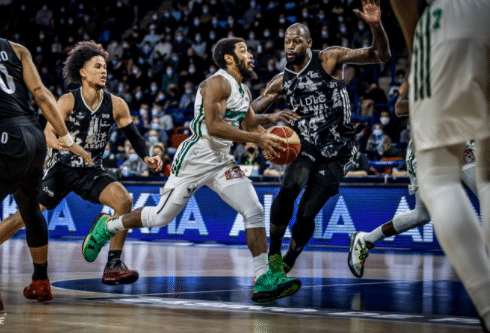 After loosing the first two games of this semifinal, Pau managed to bounce back at home. They will have a change to tie the series and force a decisive game 5 this Thursday.

Pau-Lacq-Orthez backcourt performed well in Game 3 of the Betclic Elite playoffs semifinals. Gregor Hrovat led his team in scoring (19 points) and rebounding (9 boards) during his 36 minutes of action. He has been very consistent this series so far, averaging 17 points, 4 rebounds and 3 assists while shooting 55% from the field (50% from downtown). Brandon Jefferson has been really clutch in the fourth quarter, hitting a huge three pointer to close out the game.

The star point guard struggled during Game 2, as he didn’t have the impact that players of this caliber must have. He finished this game 3 with 14 points, adding 6 dimes and drained 4 shots behind the arc on 10 attempts.

Justin Bibbins, as usual, has been impactful coming off the bench, he filled up the stat sheet with 16 points and 7 assists. The effort from Mike James and Dwayne Bacon has not been enough for Monaco as they both shot below 40%.

Pau will have the chance to force a decisive Game 5 on Thursday. If they manage to do so, it will be played in Monaco.